When you live on the Sunshine Coast, you can feel as close or as far from civilization as you like.

Vancouver is Canada’s jewel on the west coast, a sparkling city of two million with thriving and dynamic culture, dining, shopping and much more. The city is nestled between the Coast Mountains and the Pacific Ocean and regularly tops lists of the most liveable cities in the world.

Just to the north east of Vancouver and the Sunshine Coast is Whistler, home of the 2010 Winter Olympic Games. Whistler boasts some of the most exciting ski hills in North America and the village features fine restaurants, hotels and shopping. 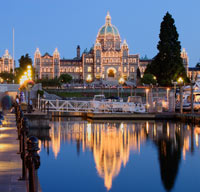 Vancouver Island and the Gulf Islands

For a truly laid back experience, take a trip to the Gulf Islands and feel the busy world slip away. Organic farms, studio tours, artisan wineries and local festivals are yours to discover out here on the “left coast.”

Just beyond the Gulf Islands is Vancouver Island and Victoria, the provincial capital. The length of the island is dotted with small towns and Victoria’ s colonial charms draw visitors from around the world.